It's rather uncommon here but the wind keeps up. It doesn't snow anymore so there are no extra problems. It does rain though. Very cold seriously wind driven drizzle. Highly uncomfortable unless you have a glass window in front of you (and out-side is on the other-side).
Current temp is 12.0°C in and 1.1°C out.

Reading, solving puzzles, writing some letters, ... and cleaning a -very little- bit. I am definitively not overstreching it today :)

It's wet and grey but not actually freezing. The difference between -0°C and +0°C is an important one here. I didn't use my car so it's still covered in icy snow. But its +0°C so it's not frozen on and wipes off easily. Most of the day stay on the plus size of freezing but the occasional rain does not make for a happy day.
Current temp is 11.1°C in and -0.2°C out.

There is almost no support so I do some bug hunting.

At noon B calls in with a problem. 'Cant add new items anymore since the SAPification'. Hmm, a more of less standard update-add program that cannot add since ~according to the source-date~ 2002. Of course now they claim it's caused by the SAP adaptation.

Running. Not much fun. What with everything being cold and wet and stuff. I like cold and I like wet, just don't go combining them. I actually run pretty well, two rounds and not really tired. W isn't feeling too well however. So that's why I could follow.

Dinner is rice with ham and egg. My brother is home so he ate most of the stew. He did leave a bit for me but not enough for a meal yet too much for eating it along with the rice.

No surprises here, the AMD multicores are much better. ( http://www.theinquirer.net/?article=27972 ) Of course they are comparing a processor that is designed for multi-core and multi-processor setups against a marketing gimmick. The P4 cores aren't bad but the rest of the chip isn't keeping up with a single core let alone with duals.

There is no ice on my car when I get up (05:30) but after breakfasting and livejournaling (06:45) the wind screen is frosted over. Most of the remains hovering around zero, there is a bit of sun but not enough en not strong enough to melt all the snow. While it is bleak and clouded it remains dry.
Current temp is 10.6°C in and 0.7°C out.

Apart from a bunch of standard support ~and a few new things~ I go on cleaning up a list of problem points. During the SAPification I did most of the work but R and W and L also picked up programs as and when they had time available. Later I did a quick round-up and check on all the programs and noticed a bunch of minor problems. Nothing dramatic just things that might cause problems a couple of months down the line. The way I kept track of the progress I could easily fix those for the programs I handled. I did not keep track of what the others actually did. L for example helped out in the early stages so any change to the solutions later on in the project had to be added. Especially during the last month I couldn't keep track of the changes so I flagged every suspect program.
Now I am working my way trough them. Seeing that I am not getting new problems thrown at me most of the suspect programs are either OK or not used. Which is fine either way.

M just offered me an old AS/400. We have two old and unused AS400 computers here and they want to get rid of them. When I say old I mean old, we don't throw things away when they are still usable, for example we are still using Pentium II/400MHz boxes on desktops. So when things get discarded it is unusable. (Another indication is that IBM doesn't take them back, not even fit for spare-parts.)
Actually I want one of them, I was really nodding yes, but the truth is I can't do anything with them so after installing them at home they would be just passive space-wastes. Sure I could keep them running but I would need an extra soundproof room for them. And some extra power lines. So I declined.

I think playing with my MacMini is a better way to lose time.

Dinner is asparagus rolls. Almost the same spicy aromatic style as the previous time I made them, with ginger and lemon zest. For a change I arranged slices of apple on the bottom of the oven dish, sprinkled with some flour and placed the asparagus rolls on top of that. At first sight not a good idea because the apples produce a lot of moisture and I like the rolls dry and because apples add sweetness which I don't really like in my main courses (sweet-sour sauces being the exception). Sweets are good for deserts.

Well, the end result is quite good. The rolls are still reasonably dry and not affected by the sweetness. They taste just great. And after finishing the rolls I am left with a dish of hot apples with cheese that dripped down from the rolls. A delicious sweet dessert.

Yay. Pure kitchen magic, making a sharp spicy dinner and a sweet aromatic dessert in the same dish at the same time and not spoiling either. Yes, I amazed myself.

About time. Though I am not to hopeful that 'looking' at the patent laws is gone result in more than tired eyes and ears ( http://www.theregister.co.uk/2005/11/29/ebay_patent_supremes/ )

Parental control on game console. ( http://www.theinquirer.net/?article=27984 ) I suppose nobody believes it's gone work, but it's gone help sales all around and, as people start to blame everything on vid-games, be a point in staying legal.

There is ice again on the wind sceen but just a very thin layer, easily washed off. Just an indication that it's still around freezing. The weather stays dry though so there's no problem of frozen slippery roads yet. Yea, stable weather is boring weather.
Current temp is 10.7°C in and 0.9°C out.

Work is not boring like the weather. Apart from some thorny support issues that is. The fun stuff is that I kicked off some performance improvements which entail writing new code stead of just tweaking old code.

Apart from that new projects for next year start to crop up. Most with unrealistic close deadlines. Like the new installation that must be ready in the tenth of January. But we don't even know what is needed. Yep, nothing boring around here.

Dinner is seaweed flavoured chinese noodles with a bit of sweet-sour sauce. Good healthy stuff and easy and fast to cook. What can be better. (The a minimum of dirty dishes is another great attraction ^_^' )

Does a chicken suffer PMS after laying an egg?

Another freezing night (-5.8°C). But finally most of the water is frozen out of the air so the day dawns bright and sunny. The sun is not very strong though so while bright it remains cold. Cold enough for the snow to keep hanging on more than a week after it fell. And without cloud cover the night is cold.
Current temp is 10.9°C in and -6.1°C out.

Work is nice. Especially considering that I did not receive any support calls. I got the first twin client and server for the legacy conversion worked out and tested. First step is making sure it works. Next will be to test it's efficiency as compared to the old set. For simple online programs it won't matter, the difference between 0.1 and 0.3 seconds is not being noticed over the network. For a batch job that handles a couple of million record the difference should be significant.

Dinner is pizza, eaten out again. It could become a habit to eat out on Thursday evening.

There is proof that Intel can do dual cores right. ( http://www.channelregister.co.uk/2005/11/30/intel_yonah_benchmarked/ ) It also proves that the P4-dualcore story is pure marketing and panic driven fiasco. Sinking more money in an already sinking and abandoned ship.

It is still freezing seriously but the air has been freeze-dried so my car is clear. Of course now that the air is finally dry the wind picks up slightly and clods move in. By noon it's all grey.
Current temp is 11.1°C in and 4.5°C out .

Again almost no support to do so I get a couple of programs re-fitted to handle the new hard coding handling.

Dinner is baked red tilapia with rice. I quit like tilapia, is a fish where you get thin but firm and solid filets from. Without fish bones. Ideal for stir frying quickly or in sushi. Tilapia is actually a tropical fish but it's locally 'farmed' in the cooling water of some power stations.

Unlike yesterday's morning today it's raining. And it continues doing so for most of the day. Most of the time it's hardly noticeable, still one or two grades under a light drizzle, but just enough to keep everything wet. There are also some fierce and heavy drizzle periods. All that with a strong wind means that everything gets damp, even in places that rain normally can't reach.
Current temp is 11.9°C in and 3.1°C out.

Shopping. Wine and fruit and groceries. And extra coffee

It's not the type of weather I like so I stay in cleaning out the kitchen. Usually cleaning out means moving clutter from one place to another. This time though I actually clear away a lot of stuff.

Dinner is a small roast that's been swimming in wine since the morning. A very long marinade gives the meat a slight gamely taste. While it bakes slowly in the oven I cook in the wine to make a good sauce ~with cream~ with it. And I serve it with potatoes and Brussels sprouts.
Delicious.

More rain and wind. But today it's real rain clattering down. Along with the rain we get rather high temperatures. Most of the afternoon is dry but only in the sense that no rain fell where I was. I did see a couple of down pours pass by though.
Current temp is 12.4°C in and 6.2°C out.

Not good weather to be out again. This time I spend the day doing laundry and folding clothes. I try ironing from time to time but I never succeed. I even get into trouble ironing something as simple as a handkerchief.

Most of the afternoon is spent with my uncle.

For dinner I make a big casserole of soup. Good old fashioned dinner, soup-meat with mustard and bread. And a a bowl of soup.

It's mostly dry, most of the day. Yeah, a clear indication that we had a bit of rain. Not as bad as in the weekend though. And it remains rather warm for the time of year so the strong wind isn't bad
Current temp is 12.1°C in and 4.3°C out.

After a bit of support in the morning I spend most of the afternoon vainly trying to find out why one (the oldest) system doesn't send mail while the two others do. It's curious cause it used to do mail. And, noticing that none of the users has called, it may well do some mail still. But it just doesn't work foe a couple of new programs. Weird.

Running alone today cause W is off on some family business in the evening. In stead of pacing for two or three rounds I run only one round but I do it as fast as I can. I finish in about twenty minutes including warm-up before and stretching after. Now I am dead.

Dinner is rice with ham and egg, from the microwave.

Some times you regret getting a tatoo ... 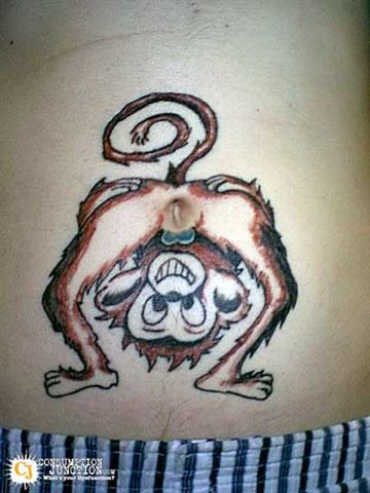